After four years of podcasting, we have finally come to the end of the series and are ready to reveal your favourite royal dynasty and to crown the Rex Factor champion. Alfred the Great, Henry II and Elizabeth I were the three finalists and the winner was decided entirely by the public vote. Read on to find out who will forever wear the Rex Factor crown…

Dynasty (not the programme)

Throughout the play-off period, we ran a survey asking people to select their favourite royal dynasty. There was some controversy around the non-inclusion of Saxe-Coburg-Gotha (a one-man dynasty) and the separation of the Yorkists and Lancastrians from the larger Plantagenet dynasty, but nevertheless, here is how you voted:

The results of the Dynasty survey

So, a pretty impressive victory for the Plantagenets. Probably deserved given that this was the longest-ruling dynasty not to mention containing four Rex Factor winners (would have been 6 with Lancaster and York) and the height of medieval England. However, perhaps the surprise of the survey was seeing the Saxons pip the Tudors into second place – probably the least known monarchs prior to the podcast, it’s great to see the lesser-heralded monarchs have won some new admirers. And it’s not as if the Tudors don’t get enough love from historians the rest of the time!

We reviewed all the kings and queens of England from Alfred the Great to Elizabeth II, we identified 18 who deserved the Rex Factor, but only one could be crowned the Rex Factor champion. Ladies and gentlemen, the winner of Rex Factor, the champion of champions, is… 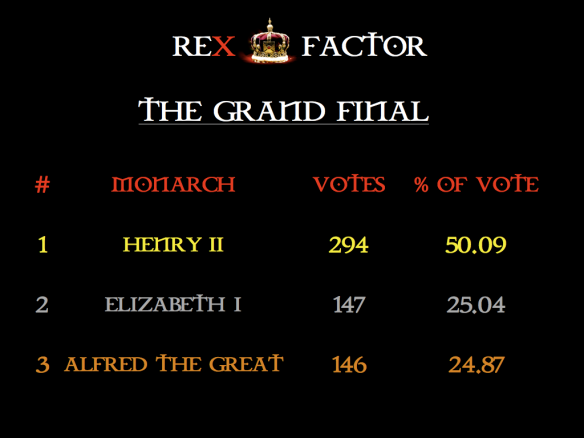 Congratulations to Henry II, the Rex Factor champion! Not one of the most famous names in English royal history, perhaps, but he was the top scoring monarch in the podcast when we did the individual reviews of each monarch and he was also the run-away winner with the public, getting just over half of the vote and over 100 votes more than Alfred or Elizabeth. As for second place, it proved a very close run thing with Elizabeth just edging Alfred by one vote.

And that, as they say, is that! Thank you so much to everybody who voted in the play-offs and for listening throughout the four years that we have been doing the podcast, it wouldn’t be what it is without all the great comments we get from you all. However, while this may be the end of this series it is NOT the end of Rex Factor! We shall return to the world of podcasting in September/October when we begin a new series reviewing all the kings and queens of Scotland from Kenneth MacAlpin to James VI. After four years, we should have a fair idea about what we’re doing now and we’re really looking forward to getting stuck into Scottish history and some new characters, so do stick with us!

In the meantime, there will be more blogs on this website and we’ll still be active on Facebook, Twitter and email, so please continue to get in touch with us on our various social media.

9 thoughts on “The Grand Final Results”