Richard III kept a pretty low profile for the first 527 years after his defeat and death in the Battle of Bosworth in 1485, but since his exhumation in 2012 his diary has been much more active. The next week will see him re-interred at Leicester Cathedral (after which his activity levels will quieten down considerably) so read on to find out what is happening where and when, and how you can follow the all of the events.

Richard III is perhaps the most controversial monarch in English history whose defeat to Henry Tudor at Bosworth is often seen as the end of the medieval era. Richard lived during the Wars of the Roses, a dynastic conflict between the various descendants of Edward III. Essentially, the mental frailties of Henry VI (a Lancastrian) led to conflict at court and a challenge from the Yorkist faction. Henry was deposed by Edward IV, Richard’s older brother, in 1461, put back on the throne by Warwick the Kingmaker in 1470 and then deposed and killed by Edward in 1471. Edward was an effective, if decadent, ruler but his early death in 1483 led to further instability. 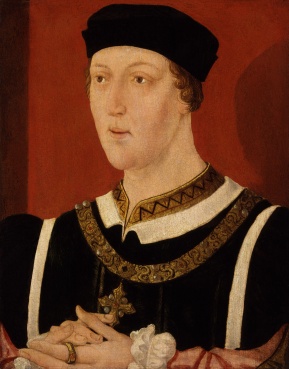 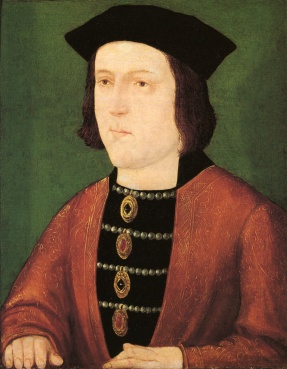 The capable, if decadent, Edward IV

Edward left behind two sons (the eldest of whom was thus Edward V) who were too young to rule. Richard, a previously loyal and trusted figure, was to be regent but his poor relations with the family of Edward’s widow (Elizabeth Woodville) meant this was going to be difficult to manage. Probably fearing for his position if the Woodvilles dominated the regency, Richard took control of his nephews and held them in the Tower of London where they waited for Edward V to be crowned. Instead, Richard declared them illegitimate and had himself made king, after which the Princes in the Tower were never seen again. 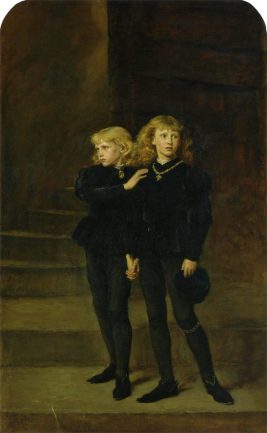 The Princes in the Tower (by Millais) 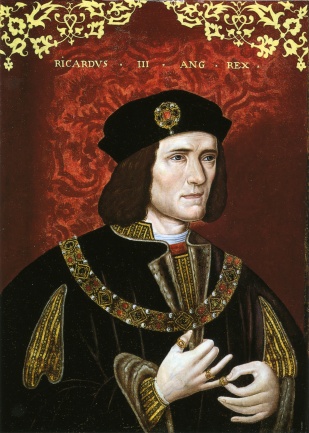 Richard struggled to win the unity of the nobility and the Lancastrians saw an opportunity to capitalise. Henry Tudor (descended via an illegitimate line) came to England in 1485 and fought Richard in battle at Bosworth. Richard had more men and was a far better soldier but crucially not all of his allies took to the field. When Richard was stranded in the thick of the fighting he was betrayed by the Stanley family, killed, stripped naked and paraded through the streets before being rather unceremoniously buried in Greyfriars Friary in Leicester. Henry Tudor was crowned Henry VII and a new era was begun.

The Exhumation of Richard III 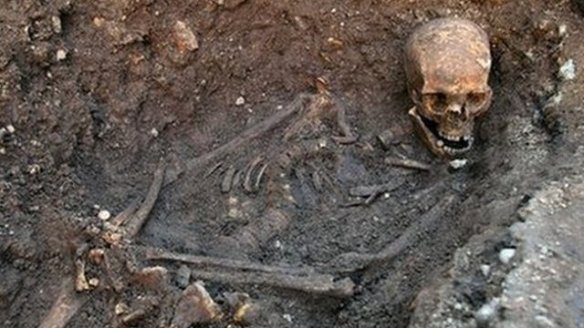 For the next few hundred years, Richard was cast as a pantomine villain by Shakespeare and had his cause defended by the Richard III society, but his place of burial became lost to history. However, in 2012 a dig organised by Philippa Langley of the Richard III Society found him beneath the car park for social services at Leicester City Council. Confirmation of his identity was made in part by a DNA match with a modern day matrilineal descendant, Michael Ibsen. 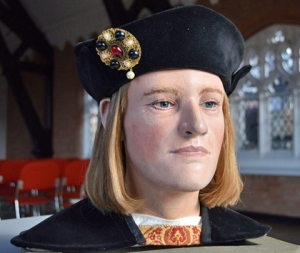 This put Richard III on the front page of the news across the world. Subsequent studies provided fascinating insights such as his height (5″8 – and not a hunchback, despite his scoliosis) and appearance (blue eyes and fair hair in contrast to the traditional dark image). However, it wouldn’t be Richard III without scandal and the discovery of infidelity in his family tree led to some suggesting that perhaps the Queen herself was descended from an illegitimate line!

That was not the only scandal for Richard, and more relevant to the next week’s activities was his becoming the subject of a court case. The Plantagenet Alliance (a group of people rather vaguely descended from Richard’s family) challenged the decision for him to be re-interred in Leicester Cathedral rather than what some might see as his more spiritual home, York Minster. This dragged on for some time but the original decision for his burial to take place in Leicester was upheld and, next week, he will finally be laid to rest.

So, what do you need to know about the next week? Well, in short, this is what’s happening:

It seems that nothing associated with Richard III can escape controversy, even in his final few days of his afterdeath! The decision for him to process through the area where he was killed, and subsequently his naked and battered body paraded, has been seen by some as being disrespectful or at the very least a little macabre. Certainly if Richard were to appear on That Was Your Life, it is doubtful whether he would look back on this with fond memories. However, you could also argue that this is a chance for closure on these events, with Richard being treated with the respect he did not receive in 1485.

The route that Richard’s procession will take

These are some of the key stopping points along the way:

A nice touch along the route will be the presence of 5,929 hand-made white roses (associated with the York dynasty) to raise awareness of missing people today, with each rose representing a missing person in Leicestershire in 2012-13. This project is run by the Bosworth Academy.

For these three days, Richard’s coffin will be on display in Leicester Cathedral, where members of the public are welcome to go inside and have a look. There will also be various services on each day. Richard’s remains will not be on display, so this is not actually lying in state, though it otherwise a similar scenario. The coffin will be covered with a specially commissioned pall featuring images of Richard’s life story. 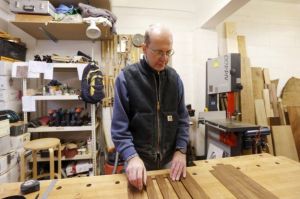 There was a competition to design Richard’s coffin and an actual image of it has not yet been revealed. However, we do know that Richard’s bones have been placed inside a lead-lined inner casket (known as an ossuary) which itself sits within an oak coffin. A nice touch with the coffin is that it has been built by Michael Ibsen – the descendant of Richard III whose DNA helped to confirm Richard’s identity. By happy coincidence, Michael Ibsen is a cabinet maker!

The tomb will sit in a specially refurbished part of the Cathedral between the newly created Chapel of Christ the King at the east end of the Cathedral and the sanctuary (the most holy place, signified by the main altar) under the tower. This is a place of similar significance to the chancel where the Grey Friars buried Richard in 1485. Appropriately for long-time Rex Factor fans, you should have a good view of the tomb from St Dunstan’s chapel!

Phillipa Langley was recently critical of the lack of pomp for Richard’s final ceremony, stating that he deserves a state funeral (as a monarch) particularly when Margaret Thatcher received one (as a Prime Minister). Actually, Margaret Thatcher did not receive a state funeral (it was a ceremonial funeral – a more military affair) and Richard is not having a funeral at all!

However ill may his treatment have been in 1485, he was buried in consecrated ground (Greyfriars) and there would have been a funeral service undertaken. This is considered by the church to be an act of finality, regardless of whether the bones are later moved. Consequently, Richard does not require a second funeral but rather a service to mark the fact that his remains are being returned to consecrated ground (i.e. re-interred at Leicester). 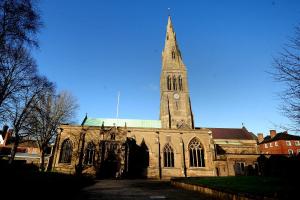 In an ideal world, bones should be returned to their original place of burial. Unfortunately in Richard’s case, the original place of burial is no longer a church but a car park! So, standard practice is for the burial to take place in the nearest consecrated ground, which in Richard’s case is Leicester Cathedral. This is why he is being buried here rather than York (which many people might see as his spiritual home) or Westminster Abbey (the home of many other monarchs, though not for some time). Perhaps if Richard had left a will declaring his desire to be buried elsewhere (e.g. York Minster) then this might have taken precedence but as it is, Leicester Cathedral is the logical location.

The day will start at 10:30 with a procession of significant guests from Leicester Guildhall to Leicester Cathedral. The Queen will not be in attendance and the Royal Family will be represented by Sophie Countess of Wessex and the Duke and Duchess of Gloucester (the Duke is the patron of the Richard III Society). At 11:30 there will be a service for the re-interment led by the Archbishop of Canterbury (but also featuring his Catholic equivalent in England, the Archbishop of Westminster). This service will feature prayers for Richard, as well as all the other people killed at Bosworth.

At the end of the service, Richard’s remains will be lowered into the ground. The next day (Friday 27 March) there will be a special service in which Richard’s finalised tomb is revealed to the public.

If you’re in the UK then there’s going to be plenty to watch on TV in the next week on Channel 4. People might be surprised that such a major historical ceremony is not on the BBC, but Channel 4 were there from the beginning with the dig that found Richard so it seems fair that they should see it through to the end. 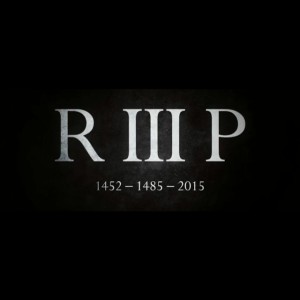 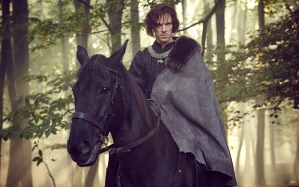 Benedict Cumberbatch as Richard III in the Hollow Crown

And that’s it for the ceremonials – Richard III will be back in the ground and resting in peace. However, the renewed interest in Richard suggests that he will continue to be one of England’s most talked about monarchs. Philippa Langley is hoping to have a feature film made of her heroic version of Richard while later this year a second series of the BBC’s Hollow Crown (filmic versions of Shakespeare’s history plays) will feature Benedict Cumberbatch as Richard III. And if you just can’t get enough of Richard III, maybe you could find a podcast episode to listen to reviewing his life and reign…

We are currently involved in an exciting new project to make Rex Factor the Animated Show which will be an animated version of the podcast. Our pilot episode is going to be focused on Richard III himself and there is a Kickstarter campaign running throughout August 2017 to raise the funds needed to make this possible. Please check us out here and see the great rewards you could get by pledging to donate to the animated show and see Richard III come to life in cartoon form. 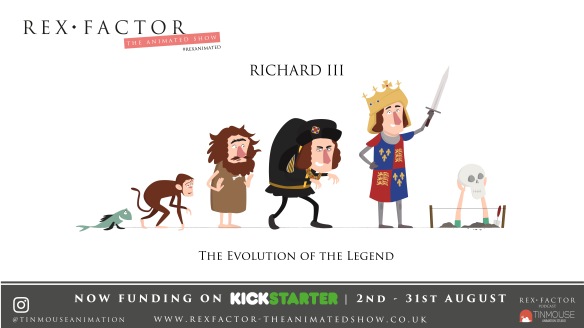