A BBC news story today revealed that descendants from those who fought on either side of the Battle of Bosworth were set to meet in Leicester as part of the commemoration of Richard III’s reinterment. This is now, however, surely overshadowed by the fact that one of the ancestors who fought at Bosworth was a man called Sir Marmaduke Constable, about whom you need to know three things: firstly, his name was Sir Marmaduke Constable; secondly, he had a long and interesting career in a turbulent period of English history; thirdly, he was eventually brought to mortal conclusion by a frog.

First of all, let’s take a moment to reflect on what a magnificent name is Marmaduke Constable! It’s the kind of name that simply demands to have the word “Sir” placed in front of it, and for the bearer of that name to also bear a suit of armour. I would like to think that, had a king encountered an ordinary man with no noble heritage, he would nevertheless have knighted him the instant that he learned the man’s name was Marmaduke Constable simply because “Sir Marmaduke Constable” just sounds right!

In fact, Sir Marmaduke did not require such an idiosyncratic response from a monarch tickled by his name. The Constable family had Norman origins and were based in Flamborough (Yorkshire), notable in their region but not major players on the national scene. The first Constable of any note was Sir Robert Constable, allied with Thomas, Earl of Lancaster, in the reign of Edward II, who was pardoned for his role in the death of Edward’s favourite, Piers Gaveston. For the next few generations, the Constables alternated names between Robert and Marmaduke while at the same time growing in prominence (both in terms of politics and land).

The father of our Marmaduke was the fourth Sir Robert Constable (1423-88). He married Agnes Wentworth and their eldest son, Marmaduke, was born in c. 1456/57. Sir Robert was in his prime during the Wars of the Roses and the Constables served with the Lancastrians (specifically the Percy family of Northumberland). Despite the victory of Edward IV (a Yorkist) in 1461, Sir Robert seems to have made the transition to the new regime without too much difficulty.

The Life and Times of Sir Marmaduke Constable

Marmaduke joined his father in the service of Henry Percy, whose father (the 3rd Earl of Northumberland) had been killed fighting Edward IV at Towton. Percy lost his earldom and was imprisoned but was released in 1469 and won Edward’s support in having his earldom restored (thus becoming the 4th Earl). The Percy family played a vital role in the north of England, so despite the recent Lancastrian allegiance, Percy was a good sponsor for the Constables.

Marmaduke and Robert (almost certainly in Percy’s service) accompanied Edward IV on his aborted campaign into France in 1475. While this would have been a rather disappointing campaign for a young soldier hoping to make his name, more opportunities were soon to come in border campaigns against Scotland in the early 1480s. Marmaduke seems to have served with some distinction as he was knighted by Percy at Berwick in 1481 (or maybe, as previously discussed, Percy just couldn’t resist the name!)

Tutbury Castle, where later Mary Queen of Scots would be held captive

Sir Marmaduke was moving up in the world and following the death of Edward IV (and the disappearance of his son, Edward V, of “The Princes in the Tower” fame) in 1483, he entered the service of Richard III. Following the Buckingham Rebellion (a failed uprising by Richard’s former ally Henry Stafford, 2nd Duke of Buckingham), Marmaduke was granted all the major Duchy of Lancaster offices in the north midlands, including his new base at Tutbury Castle where he was made constable and thus, presumably, becoming Constable Sir Marmaduke Constable, well on his way to being the 15th century equivalent of Major Major Major Major. 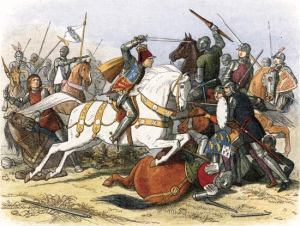 The Battle of Bosworth, where Sir Marmaduke Constable was apparently just a spectator

Despite his prominent position, it is not clear whether Sir Marmaduke was particularly close to Richard III. His predecessor as constable at Tutbury was William Hastings, the closest ally of Edward IV who had enjoyed much independence in his position (until being executed by Richard in 1483). In contrast, Sir Marmaduke was forbidden to retain the local gentry and was under much stricter royal control. As such, when Richard fought Henry Tudor (later Henry VII) at the Battle of Bosworth in 1485, it is possible that Sir Marmaduke (although present) did not fight for Richard but, like Percy, was notable by his abstention. That he received a pardon and continued to enjoy high office under Henry VII suggests that he had given little cause to be suspected of having a strong allegiance to the previous regime.

Under Henry VII, Sir Marmaduke continued to rise in prominence. He succeeded his father in 1488 and was named Sheriff of Yorkshire. This proved to be an important position as he was charged with quelling the unrest of 1489 in which a rebellion against taxation led to Percy being killed by rioters. With his erstwhile sponsor now dead, Marmaduke seems to have fallen in with Thomas Howard – an appropriate replacement as, like Percy, Howard’s father (the 1st Duke of Norfolk) had been killed (and his title removed) in the crucial battle of the generation (in this case, fighting for Richard III at Bosworth). Like Percy, Howard had been imprisoned but was now seeking to prove his loyalty and win back his title. This had begun with quelling the Yorkshire Rebellion of 1489, where he and Marmaduke would have come into close contact, and Howard evidently thought highly of Marmaduke, nominating him (unsuccessfully, unfortunately) as a Knight of the Order of the Garter in 1509. 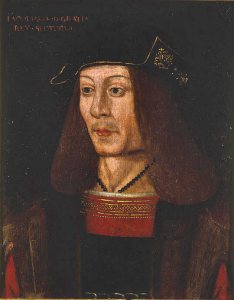 James IV of Scotland, who came a cropper at Flodden

For both Sir Marmaduke and Howard, the chance for glory came in 1513 during the reign of Henry VIII. Henry was in France when James IV of Scotland (honouring the Auld Alliance with France) invaded England with 30,000 men. Howard led the English army at the Battle of Flodden and won a decisive victory against the Scots, with James IV himself being killed (the last British monarch to die in battle). As a result of this, Howard’s dukedom was restored and he became the 2nd Duke of Norfolk in 1514. Also to enjoy praise was Sir Marmaduke, who had an important role in the battle commanding the left wing of the English army. In recognition of this, Henry VIII wrote him a letter of thanks, from which we are told that Sir Marmaduke was apparently a short man because Henry VIII’s letter states that he is “called the little”, thus giving us Little Sir Marmaduke Constable!

The Ultimate Case of a Frog in Your Throat

By this point, Sir Marmaduke Constable has lived through the reigns of six kings, of whom four were (at least temporarily) usurped, and been present at two of the most significant battles of the age. He had been a Lancastrian who found favour with Edward IV and then a Ricardian who found favour with Henry VII – despite being sponsored by successive young nobles whose fathers had been killed by the incoming monarch and their titles removed. Nothing, it would seem, could stop Sir Marmaduke Constable. However, on 20 November 1518, Sir Marmaduke was finally laid low by an enemy too powerful even for him – a frog.

Apparently, Sir Marmaduke Constable, a hardened veteran at c. 60 years old, was sat in his garden overlooking the sea when he picked up a glass of water and drank from it. Unbeknownst to Sir Marmaduke, the glass of water contained a frog, which he “inadvertently swallowed”. According to legend, the frog ate away at his heart until he (Sir Marmaduke) eventually died. If he did swallow a frog, I suspect a more likely cause of death would have been Sir Marmaduke choking on said frog but either way, the swallowing of the frog ultimately proved one battle too many! Sadly, the fate of the frog has not been recorded by history.

The plaque above Marmaduke’s tomb, a poem telling us of his impressive deeds

One of the reasons that Sir Marmaduke Constable’s career is known to history is that he tell us about it! He is buried in St Oswald’s Church in Flamborough, which features the Constable Tomb. Of particular note is a brass plaque above the tomb, featuring a poem about his impressive career (though not all entirely accurate – it claims he was 70 at Flodden).

The frog depicted on Marmaduke’s tomb

Interestingly, the tomb itself features a stone carving said to be depicting Marmaduke’s heart, which features a representation of the frog that proved his undoing! What Marmaduke would have thought of this is hard to tell (unsurprisingly he does not seem to have foreseen the requirement to predict his thoughts on being dispatched by a small amphibian) but apparently he would not have wanted too much of a fuss, writing in his will a year earlier that he should be buried as soon as possible, “without calling of friends or any other solemnity”.

Impressively, Sir Marmaduke sired six children by his second wife, Joyce Stafford (whose father was killed in 1450 by Jack Cade of “Cade’s Rebellion” fame), who enjoyed varying fortunes. His eldest son (Robert) was knighted by Henry VII for his role at the Battle of Blackheath in 1497 and later fought at Flodden, but was executed by Henry VIII in 1537 as one of the leaders of the Pilgrimage of Grace. His second and third sons (Marmaduke and William) were both knighted at Flodden, the younger Marmaduke remaining loyal to Henry VIII and accompanying him to the Field of Cloth of Gold. His grandson was Henry Constable, an Elizabethan poet whose 1592 work Diana was an early example of a sonnet sequence. As part of the Earl of Essex’s close circle, he was a minor favourite of Elizabeth I but his conversion to Catholicism and attempts to influence James I towards greater toleration led to his imprisonment and later exile. Another descendant was Sir William Constable (1590-1655) who became one of the regicides, signing the death warrant for Charles I!

An impressive family, then, but clearly you can’t top a man who is, let’s not forget, called Sir Marmaduke Constable, AND who fought (or watched) at Bosworth and Flodden AND who died by accidentally swallowing a frog. However, is this a warning from history – could the frogs strike again? I’m not aware of whether accidentally swallowing frogs was a common method of misfortune in Tudor England but it is apparently not a hazard which should concern us today. An FOI request to the Office for National Statistics asked how many people in the UK (if any) have been killed by frogs. The ONS response (the official response rather than the initial “Why on earth has somebody just asked that?!”) was that from 2001 to 2011, no one in England and Wales had been killed by a frog but they could not comment on frog-related deaths prior to 2001: “We do not know whether anyone has ever died from this particular cause in England and Wales as we do not hold that level of detail for earlier mortality data.”

The ONS should note that there is at least one frog-digestive fatality to add to the statistics!

5 thoughts on “Sir Marmaduke Constable: The Veteran of Bosworth Killed by a Frog”