Cuilean was the instigator in a dynastic conflict that beset the Scottish monarchy at the end of the tenth century. As the rival lines descended from Kenneth MacAlpin came into conflict, Cuilean took the throne from Dubh, but would he be able to keep it?  To find out how he fares, you can listen to his podcast here or read on to find out more.

Scotland in the 960s-70s was essentially a new country. Kenneth MacAlpin had started the process towards what we would come to call Scotland when he ruled both the Picts and the Scots in the 840s, but it wasn’t until the reign of Constantine II (900-43) that Scotland really came into being. The Vikings ruled what we now consider to be Scottish islands around the north and west coast of Scotland and probably still had a footing on the mainland while the south-west of modern-day Scotland remained a separate kingdom, Strathclyde (or alternatively Cumbria – it stretched into the Lake District) inhabited by the Britons. The previous fifty years or so before Cuilean’s reign had been broadly successful for the Scots and their borders were expanding but unfortunately, there was trouble brewing.

As it happened, trouble was Cuilean! The Scots had operated a system of an alternating succession, whereby instead of the crown passing from father to son it went from brother to brother before then moving to the next generation. On the upside, this meant that there was almost always a male of fighting age ready to take the throne, which proved handy when the Vikings were in the habit of liberating the heads of Scottish kings from their shoulders. However, following a period of calm and the passing of time, there were numerous claimants of fighting age whose relationship was now rather distant (instead of brothers, third cousins), and the desire to wait one’s turn had somewhat abated. 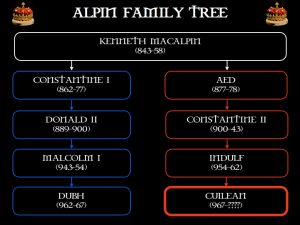 For the benefit of clarity, we’ve split the rival dynastic lines into Team Blue and Team Red, with Team Blue being descended from the first son of Kenneth MacAlpin, Constantine I, and Team Red descended from his second son, Aed. Cuilean was the latest protagonist for Team Red, the son of Indulf and probably born no later than the early 940s. When Cuilean’s father died in 962, the next person in line was Dubh but for some reason, Cuilean seems to have challenged him for the throne. We don’t know whether this was due to a dispute between the two men or their close families (perhaps an escalation in tensions that had been brewing for years) or simply a spot of good old fashioned ruthless ambition on Cuilean’s part. Either way, challenge he does and this is what happened:

“There was a battle between Dubh and Cuilean above Crup ridge, in which Dubh had the victory: at which Duncan the abbot of Dunkeld and Dubdon the governor of Atholl both fell.” (Chronicle of the Kings of Alba)

He failed! Dubh defeated Cuilean in a battle which saw the deaths of two very prominent individuals (one for the church and one for state), whom have been assumed by most historians to have been supporting Cuilean. However, the victory for Dubh was short-lived:

“Dubh was driven from the throne, and Cuilean held it for a short time.” (CKA)

And that’s all we know about how Cuilean got the throne! He took on Dubh…Dubh won…Dubh got kicked out…Cuilean became king. Perhaps there was another encounter between them where Cuilean was victorious, perhaps Cuilean engineered a coup or maybe Dubh lost support and was forced out (if Cuilean had the support of the Abbot of Dunkeld and the Mormaer of Atholl then perhaps the big figures were flocking to his camp). Either way, in 967 Dubh was exiled (and murdered) and Cuilean became king.

The Reign (predominantly the end of!)

Unfortunately, the chaotic nature of events in this period mean that the evidence for Cuilean’s reign is pretty scant. The old, trusty Chronicle of the Kings of Alba has only this to say:

“Cuilén ruled for 5 years. Marcan the son of Breodalaig was killed in the Church of Saint Michael. Leot and Sluagadach left for Rome. Bishop Máel Brigte rested. Cellach the son of Ferdalaig ruled. Máel Brigte the son of Dubican died. Cuilén and his brother Eochaid were killed by the Britons.” (CKA)

The identity of the other individuals mentioned is not clear and when taken out of the account, we are simply left with the fact that Cuilean ruled for five years and was killed, alongside his brother, Eochaid, by the Britons of Strathclyde. So, what happened and why have the Britons got involved all of a sudden?

Strathclyde and the Britons had been allies of the Scots alongside Constantine II when he was fighting the Saxon (English) king, Athelstan in the 930s. While Scotland came out of this encounter pretty well, the Britons seem to have had a harder time of it, with Athelstan’s successor, Edmund, invading the kingdom and then giving it to the Scottish king (Malcolm I) in exchange for an alliance against the Vikings. The kingdom continued with its own kingship but presumably with the Scots now as overlords.

According to the Annals of Ulster, in 971 Cuilean “was killed by Britons in a field of battle”, suggesting an outright conflict either between two armies or perhaps some kind of ambush. The location is thought to have been Abington in Lanarkshire (Lothian), an area close to various borders and potentially a likely spot for bust-ups. Perhaps the Britons and the Scots clashed in the heat of a moment in a dispute over territory or maybe the Britons, heartened by the Scottish infighting, saw an opportunity to fight back. They may even have been in league with Team Blue and assassinated Cuilean and his brother in order to bring their preferred candidate to the kingship.

However, the Chronicon Scotorum has a rather more colourful account of what happened: “Culen…was killed by Britons in a house on fire”. Rather than a battle, this implies that Cuilean fell foul to a more personal dispute. The Briton identified with carrying out this attack has been named as Amdarch or Rhydderch, the son of Dyfnwal, King of Strathclyde. As for why this might have happened, we shall investigate in Scandal… 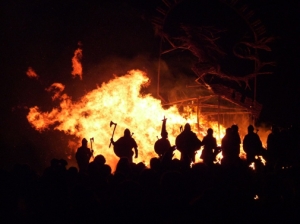 On the positive front, Cuilean is successful in capturing the throne from Dubh. This implies that he must have had a certain amount of military support and the wherewithal to make use of it. This represents the first time since 889 that the throne was usurped, so this was no mean achievement.

Strangely, despite usurping the throne, Cuilean’s recorded history does not impress when it comes to battles. The only recorded battle with Dubh was a defeat in 965 while some histories imply that his death came in a defeat to the Britons. So Cuilean loses a battle, uses skulduggery to get the throne before then losing another battle in which a kingdom that had been very much under the boot of the Scots was now reasserting itself.

He may have won the throne but as far as history is concerned, Cuilean is a loser on the battlefield!

Cuilean may not have won many battles but he certainly knew his way around whatever the 10th century equivalent was of the Daily Mail sidebar of shame. For starters, he usurped the throne and while he is not the first Scot we have studied to have done this, it is the first occasion when it was done within the (admittedly increasingly fragmented) family unit.

He was also, according to the medieval chronicler John of Fordun, rather prone towards wanton behaviour:

“For, spurning the advice of men of sense, he cleaved in all things to the paths of the young: being sore given to violating maids; a lustful adulterer with the wives of nobles and private persons. Culen, for as much as he gave up his whole mind continually to shameful vices of this kind, and could not be reclaimed therefrom by the exhortations of any of the chiefs or clergy, provoked the indignation of all the inhabitants against him.” (John of Fordun)

On a rather darker note, it seems that this behaviour may be behind his murder at the hands of Amdarch/Rhydderch. According to several sources, the cause of their dispute was that Cuilean raped the daughter of the British royal prince, for which he and his brother were killed “in a house on fire” – in other words, they were locked inside a house which was then set on fire, after which they either choked or burned to death or would have been killed attempting to escape. According to John of Fordun, Cuilean’s death was “to the great joy of many and the grief of very few”.

There are so few sources for this period of Scottish history that it is impossible to verify these accounts of Cuilean’s scandalous deeds. John of Fordun was very positive about Cuilean’s predecessor, Dubh, for no particular reason, so it may be that he largely invented stories about Cuilean to fit into some kind of narrative.

We can only go on what we have to go on and what we have with Cuilean is definitely scandalous! He usurps the throne, was a “lustful adulterer” and comes to a very graphic end due to his abhorrent behaviour. Very much a Game of Thrones bad king in waiting with an impressive death scene!

Cuilean’s contribution to the wellbeing of the people of Scotland definitely appears to balance on the negative side of the scale. After successive reigns of growth and internal peace, Cuilean challenges for the throne and kicks of a dynastic conflict that would be a major threat to the new nation’s stability. As well as his general wanton behaviour, John of Fordun goes on to say that he was “useless and slack in the government of the kingdom; and nothing kingly or worthy of remembrance was done in his days” – about as damning an indictment as you could ask for!

We couldn’t put it any better than John of Fordun! There’s nothing good to say here for Cuilean.

We know of just one legitimate surviving child for Cuilean, which gives him a score of 2.22/20.

Overall, that gives Cuilean a pretty poor total score of 17.61, though he does at least have the comfort that he beat Dubh!

So, does Cuilean have that certain something, that legacy, that great achievement, that certain something that we call the Rex Factor? Well, he does give us our first real scandal in Scotland and managed to usurp the throne but despite this he is a long way off being a Rex Factor winner – defeated in battle, bringing instability and being kicked off after just four years is not a recipe for success.

Our Verdict: No, Cuilean does not have the Rex Factor.

What do you think – does Cuilean deserve the Rex Factor? Vote in our poll below and tell us your views!