The dynastic conflict at the heart of the Alpin dynasty continued to rage with Kenneth III’s accession in 997. One rival was dead, but Kenneth would still have to see off another if he was to put the crisis to bed once and for all. To find out how he got on, you can listen to his podcast episode here or read on to find out more.

The problem for the Scottish monarchy in the tenth century was that the rules as to who should become king were pretty flexible. There was no patrilineal succession (i.e. from father to son) and instead there had operated an alternating succession, where the throne went from brother to brother before going down to the next generation. This was all very well early on, but after several generations the family tree expanded and the rival royal lines became more distant so that rather than it going from brother to brother it was being disputed by third and fourth cousins. Consequently, in the 960s (around a century after Kenneth MacAlpin had initiated the dynasty), relations turned rather sour.

The rival lines came from two of Kenneth MacAlpin’s sons – Constantine I (Team Blue) and Aed (Team Red), with the initial conflict coming between Dubh (Blue) and Cuilean (Red). A few deaths later and Dubh’s brother, Kenneth II (Blue) seemed to have sorted everything out (i.e. killed off all his contemporary rivals) and enjoyed a fairly long and stable reign. Unfortunately, when he decided to change the law so that the crown would only pass within the king’s immediate family (i.e. to his son, Malcolm) the representatives of the other strands of the family tree were not best pleased and Kenneth II found himself being assassinated in 995. 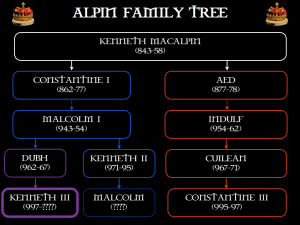 Scottish sources in this period tell us very little biographical information about the kings (or indeed anybody at all), so we don’t know when Kenneth III was born. His father, Dubh, died in 967, so it is unlikely that he was born much later than 960, making him 30-40 years old when he became king. His epithet was An Donn meaning ‘the chief’ or ‘the brown’, which is not exactly the most terrifying of nicknames.

Kenneth III of Scotland – or is he his son?!

The lack of evidence about Kenneth III goes further than his date of birth. There is some confusion among historians (including the medieval chroniclers) as to who Kenneth III actually was. Some sources (including our tall tale favourite, John of Fordun) claim that Kenneth’s son, Grim (who needs a nickname with a name like that!) was actually king. Constantine III’s reign ended when he was killed in battle and according to John of Fordun, the other leader involved was also killed and called Kenneth. So did Kenneth III actually die in battle and his son take the crown? Or was this another man entirely who happened to be called Kenneth? Almost all the king-lists acknowledge Kenneth III, so perhaps he ruled in co-operation with his son – either with Grim as the leading warrior or perhaps even a co-ruler.

Whoever was in charge, there was only one thing on the agenda and that was not being killed by Malcolm (Team Blue). Malcolm was in Cumbria when his father was assassinated and had apparently not yet had time to put on his pants and tie his shoe laces before Constantine III was also killed. However, now he was ready for action and he challenged Kenneth for the throne, according to John of Fordun he “kept troubling [Kenneth] with all manner of annoyances” (by which, we assume, he means killing people) and Kenneth, in turn, fought back. Eventually, after several years of fighting and hardship, Malcolm issued Kenneth III with an ultimatum:

“Malcolm forthwith sent to the king, by messenger, bidding him choose one of two things – either that he should vacate the throne, and lay down the crown, which he had, until then, like his predecessor, held unjustly, or that they two should, either accompanied by their warrior hosts, or man to man, if he liked, fight in the open field, and submit it to the just verdict of God, which of them ought, in all lawfulness, to be subject unto the other.” (John of Fordun)

Loch Monzievaird in Perthshire, where Kenneth III was killed

In other words, “Come and have a go if you think you’re hard enough”. Kenneth was apparently somewhat irked by this and so took up the challenge, bringing with him his most trusted men to fight at Monzievaird in 1005. Whether this is truly a full-scale battle is not clear – it sounds more like a five-a-side game rather than a full-size match – but some form of fighting took place on the north side of Loch Monzievaird (east of Perth, west of the Trossarchs) between Crieff and Comrie. Unfortunately for Kenneth III (and, presumably, Grim) Malcolm was the victor and Kenneth III was killed.

On the plus side, Kenneth III did win the crown from Constantine III, he did resist Malcolm for a number of years and took him on in a winner-takes-all battle. However, it’s not clear if Kenneth actually fought in the battle where Constantine III was defeated (and if he did, he may not have actually survived!) and he definitely didn’t survive the battle against Malcolm in which he was defeated. So, all in all, it’s not a very impressive military record.

Technically he did usurp the throne – both from Constantine III and, if you’re a stickler for rules, Malcolm. However, this was effectively a period of civil war so it’s not really all that scandalous, just a bit of run-of-the-mill bumping off your rivals.

John of Fordun paints what can only be described as a bleak picture of life for the common folk in Kenneth’s reign:

“And thus the wretched and helpless multitude long lay crushed and oppressed by them both. But while the quarrel lasted between Malcolm and King [Kenneth], who could fully unfold the losses of the inhabitants of the kingdom, continued through eight years?” (JoF)

Clearly, you would not have wanted to have been a subject of Kenneth III in this time and there is no evidence of anything positive being done to balance this out.

There is some uncertainty around Kenneth’s offspring. He is credited with having three sons, though who exactly is Grim and what happens to him is a little up in the air, while Boite is sometimes listed as a son of Kenneth II (the sources saying “Boite son of Kenneth” was not really sufficently specific!). However, we are going to give him the benefit of the doubt and award a score of 3 children, which gives him a dynastic score of 6.67/20.

So, overall that gives Kenneth III a total score of 16.44 – not very impressive, but at least better than Constantine III. However, does he have that certain something, that great achievement, lasting legacy and star quality that we call the…

No. He doesn’t. Obviously. He showed a bit more fighting spirit than Constantine III, but ultimately Kenneth’s reign comes across as little more than delaying the inevitable of being killed by Malcolm.

Let us know what you think. Does Kenneth III deserve the Rex Factor?